Firewall helps you develop better, more secure software by blocking high risk OSS components before they are cached in your repository manager. 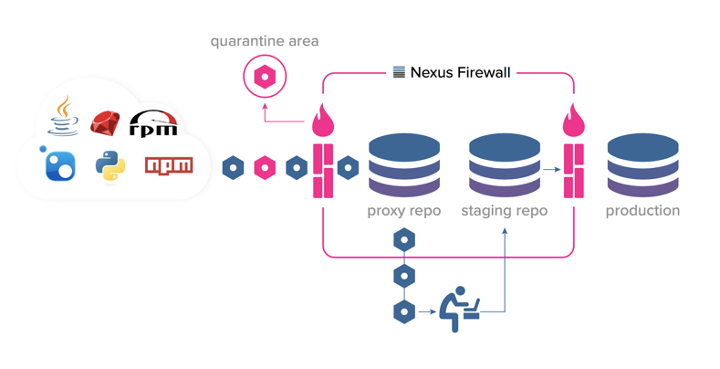 How does Nexus Firewall work?

Nexus Firewall acts very much like a network firewall but for the software components requested by your development tooling. When there is a request for a component that your repository manager doesn't have in it's proxy cache, the component is fetched from the upstream and then immediately evaluated based on the rules you have established (during setup). If it passes these rules, it is cached and served up accordingly.

If not, the component is automatically "quarantined", and a 404 response is sent back to the requestor along with the reason the component was blocked. Quarantined components can later be reviewed and in the rare cases where they are considered acceptable, they can be released from quarantine and made available in the local cache.

See how to get started

Want to see how Nexus Firewall works, without going through the trouble of requesting an evaluation, installing, and configuring it? Check out the videos or transcript below (total running time, 8 minutes).

Learn how to install and configure Nexus Firewall

Nexus Firewall requires two applications to be installed and configured: Nexus Repository 3.9 or later, and a recent version of IQ Server. This video walks you through the process of acquiring a Nexus Firewall evaluation license, downloading and installing IQ Server, and connecting Nexus Repository to IQ Server. Once you’re done, Nexus Firewall will be up and running, allowing you to use its functionality to monitor bad components in your repositories and keep out new ones (if so desired).

Learn how to audit repositories for bad components

Once Nexus Firewall is up and running, you can use its audit functionality to view the results associated with any repository for which Firewall is enabled. Whenever the contents of the repository change, the repository results are updated, giving you an up-to-date view of the health of your repositories (and the applications which pull from them).

Learn how to quarantine bad components

Get your Firewall up and Running

Give us an email address and our engineers will provide you a license key so you can try Firewall for free. You will also have direct access to our engineering team to assist you if you need any help.